Biological control agents are in use throughout the world against insects and other pest organisms. The term covers many approaches, including predators such as ladybirds, bacterial toxins such as that produced by Bacillus thuringiensis (usually termed Bt), and viruses (typically the environmentally stable Baculoviruses). It is the use of microbiological agents that underlies the proposed work.

Biopesticides are disadvantaged in agriculture because, in comparison to chemical pesticides, their relatively slow effect is inefficient in preventing crop damage during heavy infestations. They are also susceptible to the harsh environmental conditions found in such settings, in particular to the ultraviolet element of sunlight. Despite these limitations, their use is expanding at a rate of around 10% per year.

The slower but more durable effect produced by biopesticides will be much less of an issue in a domestic setting. There are also factors in the domestic environment which, when compared to the current agricultural uses, favour biological control. These include the high density of pests and the lack of destructive effects such as sunlight, rainfall, and climate extremes.

Biopesticides also have a unique strength. A replicating biological agent amplifies itself, multiplying at the expense of its target organism and producing multiple cycles of control. Therefore, they can exert control over far longer periods than chemical agents, as shown below: 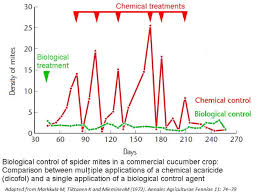 Such an effect has the potential to provide a significant advantage by decreasing the need for repeated administration.

The vast majority of biological control agents on the market are targeted against insects, which fall within the wide-ranging group (phylum) known as the arthropods. Among the other sub-groups of arthropods are the arachnids (spiders and mites) and the (mainly aquatic) crustaceans.

The most commonly used such biological control agent is the Bt bacterium. Among viruses, baculoviruses are in use against a wide range of insects. Most of the development work with virus-based biopesticides is concentrated on baculoviruses or their close relatives, because of their environmental stability and high levels of efficacy.

Baculoviruses naturally produce a crystalline structure in which the viruses are embedded. This allows them to survive for long periods in the environment. These crystals are eaten by the host pest and release the virus to replicate in the gut. They can then spread the body of the host, turning it into a “bag of viruses”, which when released go on to infect new hosts, spreading the agent and exerting long-lasting control effects.

A virus of the American citrus red mite has been evaluated as a biological control agent. These studies showed that rapid and durable killing could be achieved, and identified stable and effective delivery systems for this virus.

Baculoviruses are highly specific. This is important for a biological control agent since a lack of effect on non-target and unrelated species is one of the major advantages of such agents over chemical pesticides and underlies the accelerated approval process noted by the US Environmental Protection Agency. This high specificity minimises effects on ecosystems treated with biological pesticides. Extensive safety testing of baculoviruses has shown that they produce very limited effects even in closely related non-target species, and multiple studies in mammals and mammalian cells have shown no adverse effects. Studies of the specificity of the citrus red mite virus showed that even other mites were not harmed.

Resistance to chemical agents is a major and increasing problem since the chemical itself cannot change. As a result, resistance requires the development of entirely new agents. By comparison, resistance to biological control agents is very limited.

Such agents are themselves able to adapt (or to be adapted) to counter the development of resistance by the target pest should it develop. While chemical pesticides cannot change, a biological agent can adapt (or be adapted) faster than its target.

Biological control is highly specific in nature, and is perceived as environmentally friendly. This is an important element of the approach. The US Environmental Protection Agency (EPA) has stated that “Since biopesticides tend to pose fewer risks than conventional pesticides, EPA generally requires much less data to register a biopesticide”.

Biological agents have the potential to address unmet need, offering reduced safety concerns along with the potential for long-lasting, effective control across the range of domestic environments. The house dust mite development stream is the first such technology to be developed by Evolution, to be followed by additional products currently being incubated through low cost collaborations with expert academic and commercial partners. This low-cost route is based on the development of closely related approaches, and is intended to maximize value creation and to minimize expenditure.

The domestic settings of dust mite infestations favour the use of biological agents due to a number of factors, including high population densities, low levels of ultraviolet light, and sheltered environmental settings

The use of biological control agents is well-established, and suitable agents are known for related species and have been identified by company scientists for the house dust mite

Regulatory processes are in place for the approval of biological pesticides, which are viewed favourably by the US Environmental Protection Agency and others

User uptake will be supported by the “green” nature of the technology, along with the potential for organic certification

J.E.Gilmore (1965). Preliminary field evaluation of a noninclusion virus for control of the citrus red mite. Journal of Economic Entomology 58: 1136-1140.

D.R.Harper (2013). Biological control by micro-organisms. In “The Encyclopedia of Life Sciences”, John Wiley and Sons, Chichester; on line at www.els.net